Tales from the Path

Claire Papin ... The Beginning ...
A Gift, a Blessing, and a Prayer

Throughout my life, even as a child, I had knowledge and experience of auras and other extrasensory gifts which was totally normal to me. Not being religious or spiritual, my family taught me to shrug and pretend they weren't happening, however, nothing could have  prepared me for what was to come in 1989.

I was driving home to Houston from Los Angeles where I had been working on the pilot season and as a guest  host  for  my  friend  Carole  Dean’s  TV  show “Healthstyles.” The plan was to return home, regroup, prepare for a new home in L.A., and begin my permanent position on the show. All that changed when I began to experience a new kind of awareness that is not easy to describe.  While gazing at the beautiful scenery, a new spontaneous awareness of linking up to the Earth’s spirit, caught me completely by surprise. I began to feel a shift from not only seeing the Earth’s physical beauty, but also feeling her intelligence and sentience. I instantly became aware that Earth has a life and soul of her own. I could feel her expressing love back to me. I had not even realized that in the observation of her beauty, I was also feeling great love for her.

I could feel her consciousness, her love for us (humanity) and the love that she is. She was communicating that she wanted us to know her love for us.  Almost like the longing of a mother about to give birth using the touch of her hand upon her belly to communicate an incredible unconditional love for the child about to be born. Every  part  of  the  mother’s  body  vibrates  with  love;  it  is  a constant flow. Even though audible words were not coming forth, it was radiating an energy I could feel, see, and receive; the inaudible communication she was sending was reaching me. This awareness did not seem to be new information; it seemed to be old information, ancient in fact, already within me, rising up from deep within to my memory to conscious awareness. An overwhelming surge of emotions came over me that brought me to tears.

This life changing awareness and experience made the days ahead challenging. I could not think of much else for several weeks. I did not know how to communicate such a powerful revelation to anyone, nor did I know what to do with it. This was not something I had ever heard, or read about, before. There would be no distraction or shrugging that would tear me away from the astonishing heart opening experience I had with the Earth that day. A couple of weeks later, I saw a TV newscast showing footage of dolphins   getting   caught   in   tuna   nets.   The   report   showed fishermen pulling nets from the ocean filled with live tuna and dolphins that were being poured onto the deck of a ship. They were gathering up the tuna; however, the dolphins were left on the deck without concern for returning them to their home in the ocean. The fishermen seemed to have no emotion; as if they had done their work that way for so long that it had become second nature. It seemed they were oblivious to the senseless waste of life of an innocent species. The goal was the tuna and the money that the tuna represented, and nothing else mattered. I fell to my knees in shock while witnessing this despairing newscast.

I shuddered at the thought of what would happen with our world if the lack of consciousness displayed by the fishermen was simply a microcosm of the larger picture at hand. “My God, how could we be doing this to ourselves?” I thought. Those nets represented greed, and the dolphins were not only the innocent lives of their own species, but also represented the innocent lives of all beings; yours, mine, Earth, her environment, and every creature here on Earth. We had been getting caught in our own nets of greed and forgetfulness of who we all really are, who we are as One with all life.

The new awareness of our Earth as a living being had brought me a deeper awareness about All life on this planet. I prayed for the first time in a long time. Through my tears, I asked God to let me help; to show me how I could help inspire others to reawaken to what we are doing, and make more conscious choices; to remember that we are all connected. After weeks of gathering all the books and information I could find on how to take better care of our planet and get recycling started in my neighborhood, I began my journey of sharing this newfound knowledge with as many people as I could get to listen.

Wonderful strides were made; a few neighborhood leaders joined together with me and recycling pickup became a new addition to our community. One by one, I visited grocery stores and restaurants asking them to use only dolphin safe tuna; and paper, or plastic cups, instead of Styrofoam. It was now 1990, and manufacturers had not yet abolished the CFCs found in Styrofoam. My passion for educating as many people and businesses as possible about eco-friendly living kept me very busy.

Then, a few months later, something interesting happened. I started to have what felt like inner messages that I could feel, see, and hear altogether as an inner communication. A lot like the experience I had with the Earth in her communion with me. This inner voice said, “Claire, this is all good (referring to the work I was doing to help Earth), and there is something more.” “What more good could there be than helping the planet?” I thought. I was soon to find out what that “more” would be, little bit by little bit. A few days later the inner voice brought another message, “Something really big is going to happen with the planet; you’re going to help (in some way). Your gifts are going to increase and will be used to help.” Somehow I knew this message heralded profound changes for the Earth and humanity.

Once again, I felt that I was being reminded of something I already knew in my heart, and it was time to start remembering it. I later learned that there have been visionaries, and the like, who have spoken of great changes for humanity and Earth, however I had no exposure to this information at that time. My  dreams  became  more  vivid  and  intense.  I  would  dream events at night and then see them happen on the news the next day, or see them up to two weeks out. Sometimes, in the middle of the day, I would see a future event as a vision or during a meditation. The things I was being shown would usually be an environmental  event  that  was  about  to  take  place  in  a  very specific area, like a huge mudslide in San Francisco or a massive outbreak of tornadoes in Houston. I saw the Northridge earthquake in LA three days before it happened. My heart would go out to the people in these areas as I prayed for them to be protected from harm.

One night I was awakened by a presence in the room. It was a brilliant white light with thin streams of rainbow opalescent colors bursting outward.  The tremendous  love  that emanated from this light was so immense I wanted to bask within the experience for the rest of my life. There was a feminine energy about this light that felt familiar to me. My heart was excited beyond belief. A thought flashed through my mind “It’s finally happening!” But I did not consciously know what “it” was that was finally happening. I just knew it was something I had waited for all my life.  And that was just the beginning ... and then came Mary's Lullaby, a Gift, a Blessing, and a Prayer.

To read more of Claire Papin's true visionary experiences, visit her website or purchase her book.

Mother Mary shared this message ... “Peace will stand. It will carry forth in humanity’s efforts to aid the planet and help humanity. We must all remember that we are all One Family under God, and members of the human race who can choose to participate in the betterment of mankind and the quality of life.” May it be in Love. ~Claire Papin ... 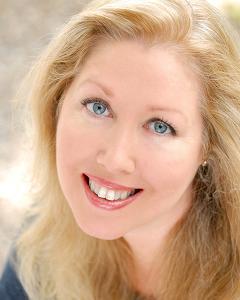 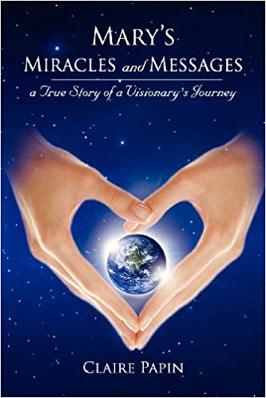 Claire’s dedication to the emerging Spirit of humanity is the heart of her voice as host and producer for Lighted Paths Radio. She is also remembered for her LIME Radio program “It’s All Good” which aired coast to coast on Sirius XM Satellite Radio, as well as her ground-breaking work as a host and producer of “Wisdom Today” on the Wisdom Network, the very first network focusing on body, mind, spirit, and earth programming.

Claire is the author of “Mary’s Miracles and Messages – a True Story of a Visionary’'s Journey,” a contributing author to the books “When Ego Dies,” and “Angel Tales,” was a columnist for Indigo Sun Magazine with her Joyful Earth Partnership articles, and is featured in the books “Mary’s Miracles and Prophecies” and “The Art of Manifesting.” She can be heard as the voice of Mother Mary in the best selling audio book “Mary’s Message to the World” by Annie Kirkwood, and produced and sings on the popular healing meditation CD “Mary’s Lullaby.”