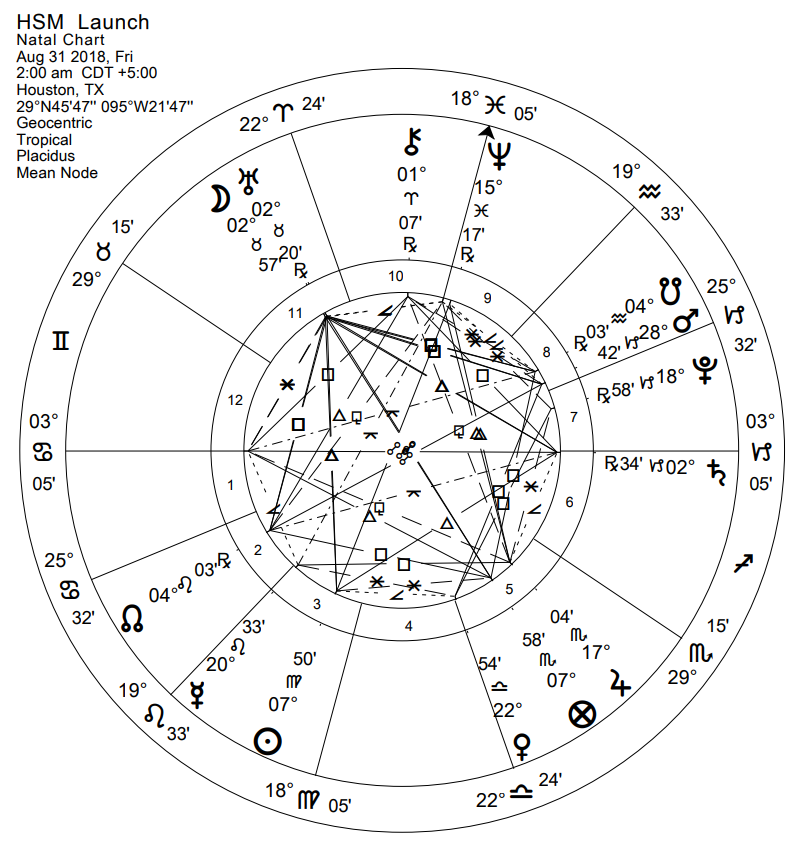 Houston Spirituality Magazine debuted on the internet August 31, 2018 at 2:00 am CDT in Houston Texas.

As an astrologer, I like to begin any enterprise at the time of day when the Sun is in the eleventh house of the zodiac. This usually occurs at approximately 10 am. The Sun in the eleventh house insures a good connection to the public. Stocks that IPO usually do so at the opening bell and that puts almost all initial public offerings in the NYSE with an eleventh house Sun. This did not happen with Houston Spirituality Magazine. However, the Sun is in the third house of communication and that is the exact purpose of HSM. The sign rising at the moment of the launch was Cancer so Cancer is the ruler of the chart. The Moon rules Cancer but loves to be
in the sign of Taurus. Taurus is where the Moon resides in the HSM chart. The Moon also happens to be in the eleventh house conjunct Uranus. The eleventh is all about group endeavors and community as well as innovative ideas. Check out the site just to see how many different people write for and advertise on HSM. The Moon is nurturing, and this magazine strives to offer information to lift us up in our awareness. Uranus and the eleventh house rule ideas that are out of the main stream. The Moon and Uranus form a sextile to the first house further insuring a great public image.

The new Moon, prior to the launch, was an eclipse in Leo on August 11 at eighteen degrees. This is a very auspicious cycle in which to launch a project, especially since the new Moon was conjunct Pluto in the chart of Sandy Penny, the owner of the site. I am sure this has changed her way of life somehow. Many opportunities to grow will present themselves to Ms Penny.

Additionally, when the site was published, Mercury was very close to the degree of the previous new Moon eclipse. This makes for powerful insightful information on the site. The full Moon occurred on August 26 at three degrees Pisces just five days before the launch. It occurred in the ninth house of publishing and higher knowledge. That full Moon forms a wonderful trine to the 3 degree first house cusp in Cancer. The full Moon was also conjunct Sandy Penny’s Jupiter. She must have been very busy around August 26. It’s all about presentation and with this pre-launch influence, the site will always be widely accepted by seekers from all over the world. Speaking of Jupiter, Sandy Penny’s Jupiter in Cancer will always be trine the first house. This is probably why the site is so visually appealing. Jupiter is a beneficent planet, so when it is in a prominent position, success is evident.

Jupiter, ruler of publishing and higher philosophy, is in the fifth house of self expression and is trine Neptune in the ninth house of publishing. Neptune in Pisces brings about higher knowledge and connection to spirit while Jupiter in Scorpio brings forth that which is mystical.

When Sandy Penny’s chart is laid over the HSM chart, we see that her natal Venus is conjunct the North node of the Moon. Leading this online community is obviously a labor of love and a goal for Sandy Penny. Some might call it Karma.